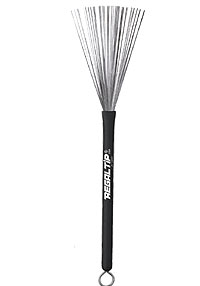 At church on Sunday I watched as the final seconds counted down to designate the start of our services. A timer displayed on the wall allowed everyone to see when the services were expected to begin at Daybreak Community Church. The band members rushed to thier spots and as the last second disappeared, the music director said “Good morning” to everyone present.

The drummer sat down at a single drum and microphone with a tool resembling the one you see pictured here. I had never seen this before as the “norm” for our drummer includes the entire drum set, cymbals, etc. I craned my neck to watch as he used what looked like a “whisk”, on a rectangular drum placed between his knees. I did my best to see if I could hear what sound he was making over there! Unfortunately, I could only hear the keyboard, base guitar and voices around me lifted in praise. It’s NOT that this is usually an unfortunate thing – smile! On the contrary, I am usually extremely pleased to be able to tell where we are as I look at the lyrics displayed on the wall behind the band! But today… I wanted to hear what this “whisk” sounded like!

Immediately following the final “Amen” and parting song, I rushed up to the drummer with Chloe in “heel”. Because I didn’t even know what it was called, I reached over to his music stand and touched the “whisk”,

“I call it a drum brush,” he explained while picking it up so that I could see it closer.

Bobby bent to his drum and “played it” again. I got down on one knee and moved my CI closer to the drum. I strained to listen… and could just barely make out a sound. It was a tiny, fluttery, BRUSH of sound. I smiled and looked up…

Bobby asked, “What does it sound like to YOU?”

Hmmm… I had to ponder that for a brief yet “ponderous” second or two.

“I think it sounds like rustling leaves,” I replied.

“Hmm. I have always thought it sounds much like Jiffy-Pop popcorn,” Bobby grinned in response.

I knew that agreeing also meant that I had instantly aged myself. For “Jiffy Pop” was something that was long before microwave popcorn. (Since Bobby and I are close to the same age, I knew he dared not make a crack about my age… besides you can STILL buy Jiffy Pop!)

If you click on the videos below, those of you with normal hearing or those who “hear again” with the miracle of a cochlear implant, you should be able to hear the sounds.

Since I have been hearing again for four years now, many times when I re-discover a new sound I equate it to a sound that I still have “stored in my memory banks“. The brain is unique that way. If I am hearing a cat purr, I have a memory of cats purring prior to my becoming deaf. I grew up on a farm in southeastern Colorado. We had many cats and I had stored away what a cat’s purr sounds like. However, if what I am hearing is new to me, I am unable to compare it to the same sound that I was able to hear in my past. The best I can do is compare it to another sound in hopes of being able to describe it and make sense of it as I listen with my cochlear implant.

To me… a drum brush sounds much like the combination of crackling leaves and “Jiffy Pop” popcorn! It is the best comparison that I can think of in my attempts to place a new sound from a new “noise maker”.

Having an acquired disability can “make” or “break” you. I remember when my husband and I first realized that my hearing loss was progressive. I was going to the audiologist about every six months as my hearing was noticeably worse. Holding an audiogram with visible, charted proof that you are losing your hearing is very sobering. It seemed as soon as I adapted to communicating at the current level of loss, I would again lose some more of my hearing. Eventually, I could hear very little in spite of two new BTE hearing aids.

Each time I learned to re-adjust I would try to remember what had worked well for me in the past. Having never been deaf before, I had no comparison. I could only remind myself that I needed to continue to be active and proactive in communication. It worked in my best interest to make my invisible disability – visible. I wore my hair up so that my colorful ear molds could be easily seen. I pointed to my mouth and asked for a repeat if I was having trouble hearing. If I could only make sense of PART of what was said, I would repeat that PART and ask for clarification of what I did not get. If the background noise was extreme, I would ask if we could move to a quieter location to finish the conversation. I tried desperately to remain upbeat and positive. The alternative was scary.

At one point in the process of my becoming a deaf person, I had really lost all hope. I had just moved from North Carolina and was trying hard to not only adjust to a new job, a new level of hearing loss, and a new community, but I had lost every friend that had meant so much to me! My North Carolina friends found excuses not to visit and emails were many times lost in cyber space. I had a great deal of difficulty connecting with people at work and church in my new home. I felt alienated and alone. Couple this with a progressive hearing loss that eventually began to even effect how well I could communicate with my family, and you were looking at one WHIPPED puppy!

Instead of adapting and reaching out for help, I isolated myself and became very depressed. Early in 2003, I found that I was actually contemplating how to end my life. How did I get to this point? At what point had I “given up”? When had I decided to no longer attempt living in spite of a disability? I’m not 100% sure of when it all went wrong, but I suspect I knowingly or unintentionally stopped remembering how wonderful life is! My brain had so many wonderful memories of living a successful and abundant life, and yet I seemed incapable of accessing those memories! I’m very glad that God intervened through people in my life who recognized I had given up.

There are not any alternatives to adaptation. Life can be… and many times IS hard. We must continue to adapt and “roll with the punches”. There are plenty of blessings and wonderful memories as well. Adapting means we deliberately adjust to change. It is a mindset and a choice.

Work hard at enlisting the help of friends and acquaintances to help you network to find a new position. You will find your friendships strengthened and you may make a friend or two you didn’t know before. Often times God moves us to a new place to live and serve which ends up providing a great deal more happiness than what we enjoyed before. Most people find that they grow and mature as they re-work that old resume, touch base with contacts and put themselves out there to obtain interviews in their seeking employment.My husband recently went through this and even I noticed the growth in his life at the end of the journey. He is now much happier than he was prior to losing his job.

Lose a loved one?

It can be so hard to say goodbye to someone we care about. I cannot write much about this topic, for truthfully I have yet to experience the loss of someone very close to me. I have seen plenty of people in my life go through this even recently, however. Their lives are a testimony to ME whether they realize it or not. It isn’t a matter of “if” I will experience the loss of someone I love. It WILL happen. I am learning how it can affect a person, and observing God’s grace poured out on the lives of those who desperately need it!

I could go on and on about different things that can happen to a person that requires we adapt. However, I would be writing all day if I did that for in truth, life insists we all learn to adapt. There is no healthy alternative!

One thought on “What does a “Drum Brush” Sound Like?”